The industry still faces multiple challenges on the regulatory front and with regard to scalability of industrial production due to high costs which have delayed mass commercialization. Despite this, the first cell-cultured meat products are beginning to enter the market with Eat JUST’s “chicken bites” being approved for sale in Singapore in December 2020, and Esco Aster being approved to produce cell-cultured meat in September 2021, from the Singapore Food Agency.

More recently, the meat shortage in the US led by the closure of meat processing plants during the Covid-19 pandemic and the rise in prices due to surging feedstock prices and labor shortage has drawn attention to cell-cultured meat production, a more sustainable method of sourcing meat proteins with a minimum impact on the environment. Further, the spread of zoonotic diseases such as salmonella and e. coli in the US and the recent Swine Flu outbreaks in China will likely fuel demand for animal-free agriculture.

Bright Biotech raises USD 3.2 million in a seed funding round 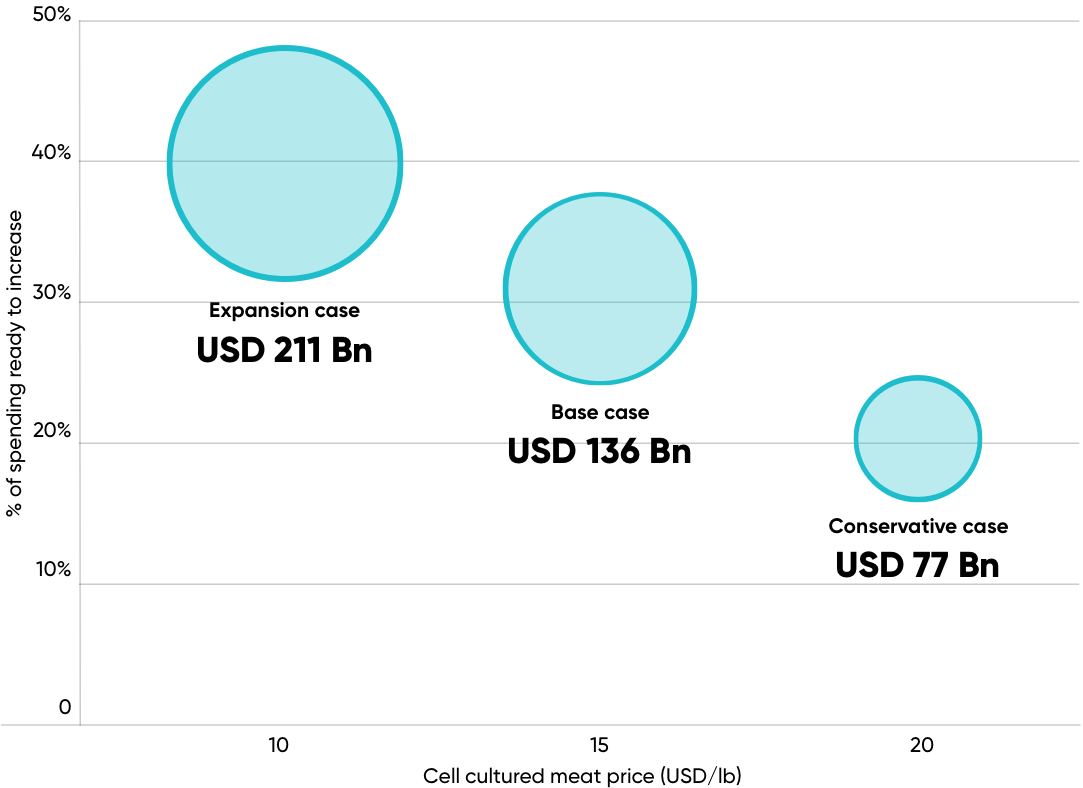 Most of the startups in the cell-cultured space are manufacturers of finished imitation beef and pork products with a smaller group focusing on the production of specialty items such as wagyu beef, bluefin tuna meat, and foie gras. A limited number of traditional meat processing and convenience food manufacturing incumbents have begun investing in the cell-cultured meat space.

The industry’s supply chain is also gradually taking shape, and new startups and incumbents developing supply side expertise should retain a significant advantage as the industry progresses.

The main disruptors aren’t displacing incumbent pure-play cell-based meat producers so much as major traditional livestock and, to a lesser extent, plant-based meat producers active in this space. The top three startups in terms of funding–Upside Foods, Eat Just, and Future Meat Technologies–have all unveiled a product and delivered technical proofs of concept sufficient to garner over USD 1.4 billion in combined funding.

Based in Israel, Believer Meats( Future Meat Technologies  prior to November 2022) develops hardware and cell lines for the manufacturing of cell-cultured meat, with the intention of commercializing its manufacturing hardware and techniques.

Believer Meats uses fibroblast cells that can be triggered with small molecules to develop either fat or muscle cells. Fat and muscle cells are cultured in a unique bioreactor that removes the waste material from the media, allowing the company to recycle parts of the media with the aim of reducing feed media input by as much as 50%. The startup replaced FBS with molecules derived from Chinese hamster ovaries (CHO), reducing production costs. The startup has managed to reduce production costs to USD 150/lb for chicken and USD 200/lb for beef. According to Founder Yaakov Nahmias, a refrigerator-sized bioreactor has the capacity to produce approximately half a ton of muscle and fat every 14 days. In May 2021, the startup reduced the cost of cell-cultured chicken breast by 50%—USD 4 per quarter-pound serving from USD 7.50 in February 2021. In December 2021, the company further reduced the cost of cultivated chicken breast to USD 1.70, surpassing its 18-month projection and speeding up its goal to achieve price parity with animal counterparts. It also had plans to launch its product in the US by 2022.

In June 2021 , Believer Meats opened what the company claimed was the world's first “industrial” cell-cultured meat facility. The facility has a production capacity of 500 kg of cultured meat per day (equivalent to around 5,000 hamburgers) and will produce cultured chicken, pork, and lamb, with beef production expected to follow. The company’s first product was expected in 2022 as a blend of 45%–60% cell-cultured chicken and/or lamb and 40%–55% plant-based meat. Besides the US and Europe, Believer Meats planned to debut in Asia, with China and India its primary markets, and partnered with Charoen Pokphand Foods to develop cultivated meat products for Asia. In August 2022 , the company announced it has developed what it claims to be the world’s first cultivated lamb.

In its latest funding round in December 2021, the company raised USD 347 million in a Series B recording the largest investment in cell-cultured meat at the time. The round was co-led by ADM Ventures, while funds were to be used to accelerate its production plans in the US.

Cell-cultured meat production is a novel technology that only a few startups have achieved, and as such, incumbents in the industry have not yet demonstrated much expertise in the field. Hence, most incumbents have entered the space through strategic investments and partnerships. On the other hand, cell-cultured meat startups lack the expertise in the relevant supply chains, most notably in raw material sourcing, which has in turn driven the need for partnerships with incumbents.